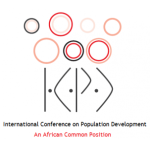 The International Conference on Population and Development was held in Cairo, Egypt in 1994 and “consider{ed} the broad issues of and interrelationships between population, sustained economic growth and sustainable development, and advances in the education, economic status and empowerment of women”, and was “explicitly given a broader mandate on development issues than previous population conferences, reflecting the growing awareness that population, poverty, patterns of production and consumption and the environment are so closely interconnected that none of them can be considered in isolation. Population is linked to the full range of development concerns including poverty alleviation, women’s empowerment and environmental protection. The conference therefore focused on population, sustained economic growth and sustained development, with special emphasis on women’s health, education and status. Delegations from 179 States took part took part to finalize a Programme of Action (PoA) for the next 20 years which addresses a wide range of population and development themes until 2015 and beyond. The ICPD PoA sets a framework for the development of more than a dozen key issues of which one was reproductive rights and reproductive health. THIS SRHR SECTION FOCUSED ATTENTION ON 5 KEY ISSUES A: Reproductive rights and reproductive health B: Family planning C: Sexually transmitted diseases and HIV prevention D: Human sexuality and gender relations E: Adolescents The ICPD PoA includes goals to significantly reduce infant, child and maternal mortality and to expand access to education, specifically for girls.

Mobilization, capacity building and advocacy for increased and improved civil society partnerships with the African Union and Regional Economic Communities in Africa for greater accountability in the ICPD and MDG processes.

The overall long term objective of this initiative is to improve sexual and reproductive health and rights in the 4 RECS and thus across Africa.

The medium term objective is to improve regional civil society advocacy around SRHR.

Increase transparency around what governments have done to date to respond to their promise to deliver on ICPD PoA.

Include all stakeholders in identifying gaps and what is necessary to improve SRHR using the ICPD PoA and ICPD beyond 2014 opportunities.

Increasing capacity of civil society organizations (CSOs), especially those focused on women, girls, LGBT and youth, through training workshops, and sharing best practices and lessons learnt, and to develop and coordinate a regional strategies and prioritization of issues on SRHR for the region and the CSO response for ICPD beyond 2014, and create stronger connections between regional and national SRHR work around ICPD+ It is envisaged that this project will contribute to the attainment of the ICPD goals and the achievement of the Millennium Development Goals: MDG 3 – Empowerment of Women, MDG 5 – Improve Maternal Health and MDG 6 – Combat Malaria, HIV and other diseases. The project strongly aims to create more obvious and effective connections between national responses to ICPD+ and SRHR needs, and those at regional and continental levels. This project also speaks to AIDS Accountability’s own goals of improving the inclusion and prioritization of accountability in the discourse in health advocacy and research debates, that accountability-based advocacy becomes a core skill and capacity among AAI’s key partners in civil society and other stakeholder groups in the AIDS response.

The Sustainable Development Goals (SDGs) as one of the outcomes of the Rio+20 Conference was the agreement by member States to develop a set of Sustainable Development Goals (SDGs), which will build upon the Millennium Development Goals (MDGs) and converge with the post 2015 development agenda. Within the Post -2015 process, an Open Working Group (OWG) comprising of 30 member States will meet in June 2014 and discuss the format of the new sustainable development framework that will succeed the MDGs. Historically, the MDGs at inception did not have sexual and reproductive health (SRH) which were only later included seven years after the goals were adopted. It is therefore the role of civil society organizations on the African continent to advocate for SRHR inclusion as the SDGs drafting commences. The ICPD focused on population, sustained economic growth and sustained development, with special emphasis on women's health, education and status. Delegations from 179 States took part took part in 1994 to finalize a Programme of Action (PoA) for the next 20 years which addresses a wide range of population and development themes until 2015 and beyond. UNFPA has been leading the review process of the ICPD, and the final stages of this process will occur in 2014. African civil society has not been coordinated enough and UNFPA has again (as above) openly criticized us for this, and opening up an invitation for AAI to play a leading role in getting CSOs into the programme.

The overall long term objective of this initiative is to improve sexual and reproductive health and rights (SRHR) in the Southern African region and thus across Africa.

AAI will continue to hold partner organisations on the ICPD and Beyond 2015 processes accountable to quality work. Processes such as the inclusion of civil society speakers at key events, the mobilisation of civil society in Africa around Beyond 2015 and other work being done by UNFPA and UNECA will be monitored by AAI, research done through qualitative and quantitative methods as often as possible, and then disseminated through our usual campaign methods to ensure that civil society, government and others are all informed of how the processes are occurring and where strengthening and more detailed monitoring and advocacy is required. Improved transparency of process of Beyond 2015 review (minimum one research report documenting this process), and greater inclusion of African civil society beyond the usual participants, and ensuring that participants are not tokenistic or box-ticking. Dialogue AAI will continue to create dialogue, and play our role as a leader in educating civil society in Africa especially on what these global processes are, how they occur, and how they affect their work at national and grassroots level. AAI will continue to run social media information campaigns and discussion forum providing a space for civil society to engage in the processes and give their voice a platform where it can be heard. AAI will also continue to play our role as one of the leaders of African civil society in these processes, and ensure that strategic and collaborative work of quality level is done wherever possible.

AAI will also continue to do research reports as we find gaps and the need during our work. Advocacy around these research findings will impact the inclusiveness of Africans in these global processes, and in the monitoring thereof after the renewed commitments have taken place. We will continue to hold partners such as the AUC, UN bodies and civil society and government to account for their inadequate inclusiveness or lack of transparency on this work. These reports will be disseminated as part on an IEC campaign on all of AAI’s platforms

AAI has been working on ICPD and beyond 2015 processes since May 2012 and is funded until end July 2017 to continue this work.

What can you do to get involved?

An Overview of AUC

The Heads of State and Government of the Organisation of African Unity called for the establishment of an African Union (AU) in the Sirte Declaration of 9 September, 1999. The Commission is the Secretariat of the Union entrusted with executive functions. The Commission is the key organ playing a central role in the day-to-day management of the African Union. Among others, it represents the Union and defends its interests;  elaborates draft common positions of the Union; prepares strategic plans and  studies for the consideration of the Executive Council; elaborates, promotes,  coordinates and harmonizes the programmes and policies of the Union with those  of the RECs; ensures the mainstreaming of gender in all programmes and  activities of the Union.

Please note that this project has linkages to the other following projects: Integration of Sexual and Reproductive Health and Rights into the Post 2015 Development Agenda African Health Policy Review ARCPD Reflections Monitoring the Maputo Plan of Action: An Assessment of SRHR in Africa Monitoring the Maputo Plan of Action: A Strengthening of SRHR in Africa The African Youth Task Force on Post 2015

Bob Munyati, Researcher, Cape Town Rating Centre South Africa, bob [at ]aidsaccountability.org, Tel no +27 21 424 2057. This project was made possible by partnership with