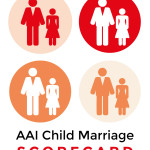 Child marriage is a practice that adversely affects girls[1] and usually leads to violations of their human rights[i]. The AU Campaign to Eradicate Child Marriages sends out a strong message that, “Child marriage is defined as a formal marriage or informal union before age 18 or any marriage carried out below the age of 18 years, before the girl is physically, physiologically, and psychologically ready to shoulder the responsibilities of marriage and childbearing. Child marriage has devastating and long term effects (health, education, psychological, emotional, mental etc.) on the life and the future of girls. The negative effects of child marriage, include but are not limited to, less education, lower earnings, health complications due to early pregnancy, compromised psychological well-being, intimate partner violence and lack of participation and voice for the girls in their community and society at large[ii]. It is a human rights, gender, health and culture, as well as a development issue.”[iii] According to the AUC Campaign the drivers of child marriage include poverty, discriminatory cultural and religious practices and a lack of political engagement.[iv] Conflict aggravates child marriage, and girls in conflict zones are forced both into marriage but conflict as well. They are unaccounted for due to the core family unit being broken up, and thus have no one searching for them as they are often suspected to be dead. Solutions vary from greater accountability from political leaders, to better and more widespread birth registrations (to determine exact age in order to provide legal protection), providing empowering education, community support and community and religious leader support, economic support for girls and their families, and a consistent and enabling policy environment, amongst others. The AAI Child Marriage Snapshot Scorecard uses an accountability lens to create transparency around data on child marriage in Africa, contribute in a small way to more dialogue by all stakeholders, and inspire further action towards eliminating child marriage in Africa and globally. The AAI African Child Marriages Snapshot Scorecard examines data presented under 4 Elements: The AAI African Child Marriage Snapshot Scorecard was launched at the Internaitonal AIDS Conference in Durban in July 2016. Authored by Yumnah Hattas & Phillipa Tucker. Read the AAI African Child Marriage Snapshot Scorecard here Contact info at aidsaccountability dot org with questions, feedback and comments.
[1] Child marriages to boys do exist in some parts of Africa, but remain statistically low or under-reported and as such do not form part of the ambit of this report.