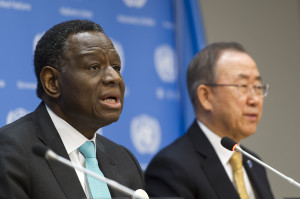 The ICPD Beyond 2014 Global Report is the culmination of a landmark UN review of progress, gaps, challenges and emerging issues in relation to the ICPD Programme of Action. It gathers data from 176 member states, alongside inputs from civil society and comprehensive academic research.

The report highlights the fact that development gains from the past 20 years cannot be sustained unless governments tackle the inequalities that hurt the poorest and most marginalized.

It also finds that growing inequalities will undo significant gains in health and longevity made over the past 20 years. To sustain these gains, the report which was launched on 12 February 2014 in New York by the United Nations Secretary-General Ban Ki-moon and UNFPA Executive Director Dr. Babatunde Osotimehin, argues that governments must pass and enforce laws to protect the poorest and most marginalized, including adolescent girls and women affected by violence as well as rural populations. The document also underlines that the number of people living in extreme poverty in developing countries has fallen dramatically from 47 per cent in 1990 to 22 per cent in 2010 but many of the estimated 1 billion people living in the 50-60 poorest countries will stagnate as the rest of the world gets richer. “Nearly 1 billion people have escaped extreme poverty. Child and maternal mortality have been cut by nearly one half. There are more laws to protect and uphold human rights,” said United Nations Secretary-General, Ban Ki-moon. “But enormous inequalities remain in the realization of those rights and access to vital services."

The report is the first truly global review of progress, gaps, challenges and emerging issues in relation to the landmark International Conference on Population and Development (ICPD), held in Cairo in 1994. It gathers data from 176 countries alongside inputs from civil society and comprehensive academic research. The findings provide compelling evidence strongly reinforcing the ground-breaking focus of the Cairo Programme of Action, placing human rights and individual dignity at the heart of development.

“It’s time then to move from words to action. We cannot afford to wait another 20 years to address the inequalities plaguing our collective well-being,” said UNFPA Executive Director, Dr. Babatunde Osotimehin. “Development gains should not be limited to the fortunate; they should reach all populations.”
The report clearly shows that the Cairo Programme of Action has significantly contributed to tangible progress: fewer women are dying in pregnancy and childbirth; skilled birth attendance has increased by 15 per cent worldwide since 1990; more women have access to education, work and political participation; more children are going to school, and fewer adolescent girls are having babies. Population growth has also slowed partly as a result of the new approach, which emphasized individual decision-making in population trends.

Yet, it also warns that these successes are not reaching everyone equally. In the poorest communities, women’s status, maternal death, child marriage, and many of the concerns of the Cairo Conference have seen very little progress in the last 20 years, and, in fact, in some instances are being reversed. Life expectancies continue to be unacceptably low and 800 women a day still die in childbirth and there are still 222 million women without access to contraception and family planning.

Adolescent girls, in particular, are at risk in the poorest communities. More girls are finishing primary school, but they are facing challenges in accessing and completing secondary education. This is problematic for everyone because young girls – if provided with education, including comprehensive sexuality education, and employment opportunities – can support higher economic growth and development. Capitalizing on their aspirations will require deep investments in education and reproductive health, enabling them to delay childbearing and acquire the training needed for long, productive lives in a new economy.

“Too many people, particularly the poor, still live without access to sexual and reproductive health services, including family planning,” said Dr. Osotimehin. “And laws designed to protect the rights of women and girls, where they exist, are often not enforced.”

The report also finds, that the global community still must do more to protect women’s rights, even beyond adolescence. Significant gains have been made, particularly with respect to maternal death, which has declined by nearly half (47 per cent) since 1994. Yet, in one of its most alarming statements, the report says that one in three women worldwide still report they have experienced physical and/or sexual abuse and there are areas where many men openly admit rape without facing consequences. And, in no country are women equal to men in political or economic power.

These findings provide a strong base of evidence for why, to maintain development gains, governments must enact and enforce laws that eliminate equality gaps. According to the report, 70 per cent of governments have said that equality and rights are priorities for development.

For more information please visit the ICPD Beyond 2014 website: