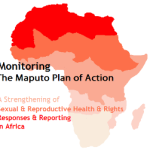 Sexual and reproductive health and rights (SRHR) are usually understood as the rights of all people, regardless of their nationality, age, sex, gender, health or HIV status, to make informed and free choices with regard to their own sexuality and reproductive well-being, on condition these decisions do not infringe on the rights of others. This includes the right to access education and information, services and healthcare.

As much as SRHR are considered to be basic human rights and fundamental to development, “conditions are devastating the African Continent: 25 million Africans infected with HIV, 12 million children orphaned due to deaths related to AIDS. 2 million deaths from AIDS each year, women increasingly affected with the feminization of the epidemic; 1 million maternal and newborn deaths annually, an African woman having a 1 in 16 chance of dying while giving birth; high, unmet need for family planning with rapid population growth often outstripping economic growth and the growth of basic social services (education and health), thus contributing to the vicious cycle of poverty and ill-health. Today, by any measure, less than one third of Africans have access to reproductive health (RH)”.[1]

As a result of the state of SRHR in Africa, various governments, as well as regional economic communities (RECS) such as the Southern African Development Community (SADC) and the continental organization the African Union (AU), responded to the call to act with the development of policy on SRHR, not least of which was the International Conference on Population and Development (ICPD) in 1994, the African Union Conference of Ministers of Health (CAMH) and the Maputo Plan of Action (MPOA) in January 2006.

In addressing population, the environment and consumption patterns, the ICPD PoA focuses on the family, internal and international migration; prevention and control of HIV/AIDS; technology, research and development; and partnership with the non-governmental sector.

At their 15th Session, the AU Assembly requested the AUC to develop (and align with MDGs 4 and 5) a set of indicators for monitoring and reporting on the MPOA. The AUC has gone through a rigorous process of developing and piloting the indicators.

PLEASE NOTE THAT THIS PROJECT HAS LINKAGES AND OVERLAPS WITH THE FOLLOWING PROJECTS: Integration of Sexual and Reproductive Health and Rights into the Post 2015 Development Agenda African Health Policy Review ICPD and Beyond 2015 ARCPD Reflections Monitoring the Maputo Plan of Action: An Assessment of SRHR in Africa The African Youth Task Force on Post 2015

Increase transparency around MPOA & ICPD & Accountability, focusing on improving annual data collection for contributing to the annual reports to the AU Heads of State and Government Summits until 2015.

The project intends to conduct the following activities in order to achieve the above long, medium and short-term objectives. Most of these activities speak to various objectives mentioned above, and the particular focus is on strengthening the M&E, reporting and accountability systems within the SADC AU Member states as a means to create a vital and powerful push on sexual and reproductive health and rights in SADC all within the ambit of MPOA and ICPD.

i. Monitoring the MPoA & ICPD Workshops

This includes 3 workshops each in five countries in SADC in which a minimum of 30 participants (key players from media, civil society and government as well as various other stakeholders) will achieve the following objectives:

This includes conduct one-on-one meetings and telephone calls with relevant stakeholders as a means to reach those that do not participate in workshops and liaising with activists advocating for greater inclusion of women, girls and vulnerable groups in demanding accountability by providing statistical support for their work.

This will include the dissemination of Phase 1 findings at conferences, workshops and meetings, including need for best practice to be understood and included in future work, as well as to inform others of what the project is about and to share our lessons learned with them.

What can you do to get Involved?

1. Subscribe to our newsletter (see sidebar on the right of the page) and get updates on meetings, discussions, advocacy tools and trainings.

An Overview of AUC

The Heads of State and Government of the Organisation of African Unity called for the establishment of an African Union (AU) in the Sirte Declaration of 9 September, 1999. The Commission is the Secretariat of the Union entrusted with executive functions. The Commission is the key organ playing a central role in the day-to-day management of the African Union. Among others, it represents the Union and defends its interests; elaborates draft common positions of the Union; prepares strategic plans and studies for the consideration of the Executive Council; elaborates, promotes, coordinates and harmonizes the programmes and policies of the Union with those of the RECs; ensures the mainstreaming of gender in all programmes and activities of the Union.

An Overview of AAI

AIDS Accountability International (AAI) was established in 2005 with the mission to follow up on commitments to the AIDS epidemic made by governments, businesses and civil society. Still today, there is a widespread lack of advocacy tools for key actors to hold leaders accountable for the rollout of policy, implementation and impact. AAI believes that leaders should be informed and by means of our research holds ineffective leadership accountable whilst applauding those who live up to their promises. AAI creates needs driven research to empower advocacy efforts by developing tools that enables organizations, parliamentarians and media representatives to hold governments and leaders accountable, helps identify best practice and assists governments with monitoring and evaluation of their programs. Through these means, AAI attempts to encourage those who are delivering on their commitments, put pressure on those who are under-performing, and stimulate constructive debate about what can be learned from different approaches.