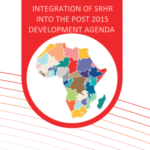 One of the major problems that contribute to current state of sexual reproductive health and rights in Africa has been the lack of transparency at national level to appropriate address youth needs. This lack of transparency has led to African leaders in New York not adequately accounting to the youth constituency despite national and regional policies that support the provision of universal access to sexual and reproductive health and rights. An example of this disconnect is that of Nigeria which has an existing national policy on Sexual Reproductive Health (SRH) but consistently opposed any mention of SRH at regional and global level through out the negotiation process of the Post 2015 development agenda. It is through such inconsistences in policy formulation and implementation that continue to adversely affect young people’s universal access to sexual and reproductive health services. It is for this reason that advocacy efforts targeted at improving policy development and implementation must target governments at country level. This advocacy must further be aimed at increasing youth related data on sexual and reproductive health and rights forming a vital starting point for dialogue.

In order to address some of the problems raised above also requires increased dialogue at national level between civil society, national governments and other implementing partners. This dialogue must be aimed at discussing progress made in the implementation of sexual and reproductive health and rights related goals and targets.

There continues to be lack of action that is required in addressing youth SRHR issues on the continent. In order to address youth African youth issues in the post 2015 development agenda, government, civil society require to make practical, implementable and sometimes innovative suggestions: • There is need to ensure a human rights approach to all development work, with the inclusion of engaged youth throughout the process, and using only 4 Cs policy (comprehensive, coherent, coordinated and cross-sectorial), at all times based on quality data only. • Address structural drivers such as gender inequality and poverty (including access to basic services) as a matter of urgency. • Ensure that finance for development programmes are innovative yet stable, whilst ensuring all stakeholders fulfil commitments to financial allocations and increasing representation of Africans in financial and economic decision-making spaces globally. • Ensure a progressive approach to allowing youth’s bodily integrity and the opportunity to make their own health decisions, whilst expanding access to treatment for mental illness, substance abuse, sexual and reproductive health and rights, and non-communicable diseases in youth friendly environments. • Ensure that Youths have universal access to quality education, including but not limited to alphabetical and numerical literacy, secondary and tertiary education, comprehensive sexuality education and citizenship and human rights education, including life skills such as leadership, creative thinking, strategic planning and problem solving. This must be equally provided to all, without gender or geographical, religious or other discrimination. • Ensure Youth engagement in ensuring good governance, transparency and accountability and anticorruption monitoring. Governments need to make sure that Youths are engaged in the design and implementation of any emergency responses to security threats and are at all times physically and adequately protected by the government.

The overall long term objective of this project is to improve universal access to sexual and reproductive health and rights in Africa through influencing the new global development framework.

The mid-term objective of this project is to increase input and influence from civil society on the implementation of the Sustainable Development Goals at country level.