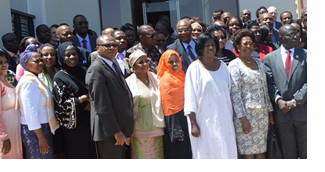 The year 2015 marks the review of African Health policies such as the Maputo Plan of Action; the Maternal, Newborn and Child Health (MNCH), the Abuja Call and AU Roadmap. Documents that provide a conducive policy environment at the continental level that ensure policy guidance and direction to improve the health outcomes of the Africans. For this reason, the African Union in collaboration with several stakeholders from the civil society and UN agencies has been conducting a review process from mid-2014.

As a critical part of this review process, a validation meeting was held on 25th and 26th February, 2015 in Nairobi, Kenya. This meeting was aimed at validation the draft MPoA, Abuja Call and AU Roadmap review reports; the draft 2014/15 MNCH Status Report and consider the African Health Strategy inception report. Specifically, the meeting reviewed and validated the draft: a) Maputo Plan of Action review report; b) 2014/15 MNCH Status Report; c) Abuja Call review report; d) AU Roadmap on Shared Responsibility and Global Solidarity for HIV/AIDS, TB and Malaria review Report. It was expected that among outputs of the meeting would be that consultants hired to draft these reports would receive comments that would help to finalize the draft reports.

The meeting brought together representatives of the Member States and partner organizations from both UN agencies and civil society involved in the review of the health policy documents and preparation of the MNCH status report. During the opening remarks, Dr. Olawale Maiyegun, Director of African Union Commission’s Department of Social Affairs mentioned that through the review period, we have the opportunity of setting high policy goals than global policy instruments in order to meet health needs on the African continent.

The meeting proceeded with presentations by the consultants on the aforementioned reports. Once this was done, participants broke off into plenary discussions to provide feedback on the developed reports. AIDS Accountability International (AAI) participated in the plenary session that focused on the review of the Maputo Plan of Action. During this session, AAI was happy to note that the MPOA Draft Review Report included a number of critical issues in its recommendations. This delightful recommendations contained language on the following key areas:

Nonetheless, AAI highlighted the need to increase coverage within the draft report on youth issues given the continental desire to achieve the demographic dividends as expressed in emerging continental policy frameworks such as the Common African Position and Agenda 2063. In addition, it was noted that the MPOA draft review report was specific to providing a status of the MPOA in the context of the sexual reproductive health services without much emphasis on reviewing of provision of reproductive rights on the continent since its adoption in 2006.

Overall, plenary sessions resulted in participants pointing out several issues other issues that were important for the fulfilment of regional health policies. These points include the respect for human rights and a call for sexual and gender equality as being an integral part of success for health provision.

The plenary discussions between Member States and Partners provided the required additional data and information to facilitate finalization of the reports. The revised reports are expected to be ready by second week of March in preparation of the Heads of State Summit to be held on 14-15 June in Johannesburg, South Africa. The Validation meeting was closed by H.E. Dr. Mustapha Kaloko, Commissioner for Social Affairs who thanked all involved partners on the project.