Evaluating the Reporting Process for the MPOA Progress Assessment Tool

A review of the inclusion and exclusion of civil society in the monitoring and evaluation procedures of the Maputo Plan of Action.

This report looks at the role that civil society played in completing the Maputo Plan of Action reporting. It evaluates the why civil society involvement in the UNGASS reporting process has been helpful and is both desired and achievable, examines 3 case studies on Malawi, Sudan and Benin and then asks “Why has the same collaborative process that is improving for UNGASS not also happening with MPOA?” The report  then ends with recommendations on how the future rounds could be improved. Principle Author: Gemma Oberth.

The implications of this lack of civil society involvement in the MPOA reporting process are significant. With UNGASS reporting, there were several instances where strong differences of opinion exist between government and NGOs, specifically with respect to which data to include or omit in the UNGASS reports. Governments tended to support the inclusion of data that showed them in the most favourable light.  For instance, civil society’s estimates of effective service implementation are often much less optimistic – and perhaps more realistic - than those of government officials. It has been shown that this difference can be a considerable margin, ranging from 7 per cent to 31 per cent.  On the flipside, some civil society organizations expressed substantial dissatisfaction with the government’s insufficient inclusion of data on most-at-risk populations.  Without civil society involvement in the government MPOA Progress Assessment Tool, we may be receiving an inflated sense of progress towards achieving Sexual and Reproductive Health and Rights in Africa.

Why has the same collaborative process that is improving for UNGASS not also happening with MPOA?

1. One potential reason for why the UNGASS reporting process appears to be a much more inclusive and collaborative process than the MPOA M&E, might be because there has only been one round of Progress Assessment Tool submission (2009) for MPOA, whereas there have been five rounds of UNGASS reporting. It appears that UNGASS reporting has improved, year by year, in terms of including civil society actors into its M&E apparatus. Perhaps the repetition of this process is part of the learning curve for state and non-state collaboration.

2. A second factor may be the longer time line. UNGASS requires countries to submit progress reports every two years, whereas the MPOA stipulates there should be annual reporting. With longer time horizons, countries may have more opportunity to collaborate with others.

3. It may also be that guidelines on completing the report are much clearer and readily available for UNGASS M&E than they are for the MPOA. The UNAIDS website has a whole section on reporting guidelines, including a summary of indicators required, a detailed document on how to calculate them and a Frequently Asked Questions booklet. For the PAT, there are no guidelines included in the MPOA. However, in July 2011 the African Union developed a Monitoring and Evaluation Indicator Reference Guide, which includes detailed instructions on how to calculate MPOA indicators. While these came out after the first round of reporting was complete, perhaps this set of guidelines will help improve the collaborative approach in round two.

4. Financial motivation might be at play with respect to UNGASS reporting, since UNAIDS is a major donor to many Southern African countries. As the case may be, the Country Progress Reports for UNGASS might be more heavily prioritized in terms of financial reward, than the PAT for the MPOA. This might be a motivating factor for countries to submit better reports, which certainly exists at a much more significant level for UNGASS than it does for MPOA. 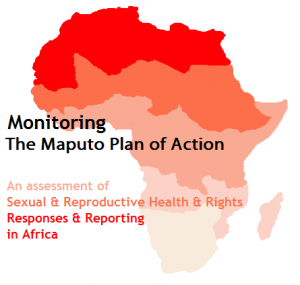 5. In a similar vein, SRHR NGOs may not be as well funded as HIV organizations. It has been shown that financial assistance for HIV/AIDS rose as high as 75 per cent of total population assistance in 2007, while, by comparison, basic reproductive health services only received 17 per cent of total population assistance that same year. This financial assistance for HIV-related organizations might put those groups in a more resource-equipped position to be aware of - and become involved in - government reporting processes.

6. Another factor that may be affecting the level of civil society involvement in UNGASS as compared to MPOA could also be that National AIDS Commissions (NACs) already include civil society members. For instance, roughly 90 per cent of countries have at least one civil society representative already sitting on their NAC.  Therefore, there is already a mechanism in place to promote government collaboration with civil society around HIV M&E, but there is not the same level of institutionalized public/civil society relationships for SRHR.

7. SRHR issues are relatively new on the agenda, compared with HIV/AIDS. This is not to say that SRHR issues have not been around as long. They have certainly been a public health consideration long before HIV was first diagnosed in the 1980s. However, in terms of media and donor favour, it is the sense of many scholars that it might not have been until UNAIDS’ 2007 statement that “global HIV incidence likely peaked in the late 1990s”  that priorities began to shift away from HIV, towards Health Systems Strengthening, and the other health-related Millennium Development Goals (MDGs), which are MDG #4 (child mortality) and MDG #5 (maternal health).  This recent shift in health development focus makes SRHR a relatively new topic of international focus, when compared with HIV/AIDS. For this reason, it may be that previous funding, focus and prioritization of HIV/AIDS contributed to the relative success of the UNGASS reporting system, compared to the MPOA PAT. With shifting emphasis, however, the weight and importance placed on M&E systems such as the MPOA PAT, may gain prominence in the near future.

8. Lastly, while the recognition of the need for civil society inclusion in the MPOA seems well understood, both by governments and non-state stakeholders, the way in which such inclusion is perceived may not be as broad as it ought to be. The use of the word ‘implementation’ in the MPOA might be contributing to the misunderstanding that it is civil society’s job to rollout programmes, while it is government’s job to report on them. The International Planned Parenthood Foundations seems to adopt this conceptualization, noting that:[T]he Maputo Plan of Action consolidates priorities and actions of African governments and civil society, it is built on a foundation of collaboration to achieve development goals. [...] To ensure that civil society fulfils its responsibilities in implementing the Maputo Plan of Action, in January 2007 IPPF Africa Region mobilized African civil society, including media outlets. Dialogues and negotiations resulted in national action plans for civil society organizations and media.

1. AAI recommends longer time-lines for PAT reporting. It is clear that the initial commitment to submit these reports once a year is both unrealistic and undesirable. Perhaps these reports ought to be submitted biannually, like UNGASS Country Reports. However, it might also be advisable that they be due during alternate years, when UNGASS reports are not also due. This might increase the likelihood of civil society collaboration, since they will not already be occupied with UNGASS processes.

2. There should also be longer deadlines for the submission of these reports. Some respondents voiced regret that there was no time to consult civil society, though they would have liked to. If the PAT is circulated with more time before it is due, this will also increase the likelihood that civil society has a chance to become involved, contribute and critique.

3. AIDS Accountability International also recommends the wide dissemination of the African Union’s Monitoring and Evaluation Indicator Reference Guide, available in English and in French, so that countries may make use of this resource in their PAT reporting process. This document is a detailed M&E guide for the MPOA indicators, which describes how to collect and calculate data, as well as how to effectively fill in the PAT. This guide is available here

4. Lastly, AAI suggests that NGOs and civil society take greater initiative in getting involved in the MPOA PAT process. Of the groups consulted, many did not know this mechanism even existed. The onus is not just on governments to invite civil society to the table; NGOs must be aware of their responsibility to actively become but pressure on governments to facilitate non-state contribution.