About the African Youth Task Force

The Post-2015 Development Agenda will be defined through an intergovernmental process during the 69th
session of the UN General Assembly (16 September 2014 – September 2015). This process will involve all
governments represented at the UN General Assembly, and will conclude with a Post-2015 Summit, which is
currently scheduled to take place in September 2015. The intergovernmental process, which will take the form
of negotiations, will be based on a series of inputs from the following on-going key international processes,
inter alia the Open Working Group (OWG) on the Sustainable Development Goals (SDGs).

In addition to the OWG outcome document, input will also come from other global reports such as such as the
High Level Panel (HLP) report, the Global Compact, 1 Million Voices report (UN development group report)
the sustainable development solutions network; The Colombo Declaration of the World Conference on Youth
(10 May 2014); The Global Youth Call presented at the ECOSOC Youth Forum (3 June 2014); The Ministerial
Declaration of the 2014 high-level segment of the Economic and Social Council and the high-level political
forum on sustainable development (9 July 2014); The outcome of the Third International Conference on Small
Island Development States (September 2014). And also those that we are still waiting for: The report of the
Intergovernmental Committee of Experts on Financing Sustainable Development (expected August 2014); The
President’s Summary from his High-Level Stocktaking Event (11-12 September 2014, New York), preceded by a
civil society consultation on 26 August.

Furthermore, it is also hoped that African regional level commitments will also provide input into the Post
2015 development agenda. These commitments include but are not limited to: the African Youth Charter (2
July 2006); Maputo Plan of Action, a continental framework on Sexual Reproductive Health and Rights (SRHR)
(2006); Addis Ababa Declaration on ICPD Beyond 2014 (31 October 2013); African Common Position on the
Post 2015 Development Agenda (5 June 2014) and Agenda 2063 (30 May 2013).

Given the above and the forth coming inter-governmental negotiations, an African Youth Task Force
representing civil society has been created to advocate for key issues that relate to youth empowerment
during this process. This group will be tasked with the role of advocating for youth empowerment needs
in the new Post-2015 development framework with a focus on; health, education, employment, inclusive
participation, security and good governance.

Long-term Objective: The overall long term objective of this project was to improve SRHR in Africa through influencing the new global development framework.

Mid-term Objective: The mid-term objective of this project was to increase African civil society input and influence in the global processes i.e. the SDGs.

Short-term Objectives
The short-term objectives of this project were to mend the disconnection between the African continent and
the negotiators in NYC by means of the foloiwng activities:
• Identify key African negotiators in the permanent missions, based on position in the OWG, stances at
home and in NYC on SRHR (especially wrt abortion, sexual rights, and youth), and other pertinent issues.
• Sensitise, build alliances with and advocate that these PMs improve the representation and demands of
African youth in the global processes.
• Provide a platform for youth representing African civil society to advocate with the African OWG
members and other African negotiators on the Post-2015 agenda.
• Propose and inform African strategy for engagement beyond September 2014.
• Identify and repair barriers to consistency between capital and PMs, and work to ensure all relevant
individuals are more accountable.
• Discuss the stances of the countries based on existing regional commitments such as Maputo Plan of
Action, African Youth Charter, African Common Position and the Agenda 2063.
• Demonstrate the (unmet) need for universal access to SRHR based on existing evidence and data
analysis.

A group of 12 young individuals were identified to represent African civil society during advocacy meetings
with permanent missions to the UN in New York in order to influence their position on SRHR in the new
development framework. These individuals were considered a fair representation based on the diversity of the African continent. As much as possible chosen delegates will be from the countries that will be targeted in New York. This group will be tasked with the role of advocating for SRHR in the new Post-2015 development framework. Selection of proposed African Youth Task Force members has been done by identifying partners with whom AAI has worked with before and have proven record of knowledge, experience and team playing skills. Given that the proposed initiative had a tight timeframe, broad consultation process was not used, but rather
through personal recommendation.

The selection criteria included the following:
• Aged 20 -35 years;
• Representative of geographical regions (Central, Eastern, Northern, Southern and Western Africa);
• Representatives must have a sound understanding of the Post 2015 development agenda process;
• Gender representation and sexual orientation must be considered in selection.
• Representative of targeted countries in New York. 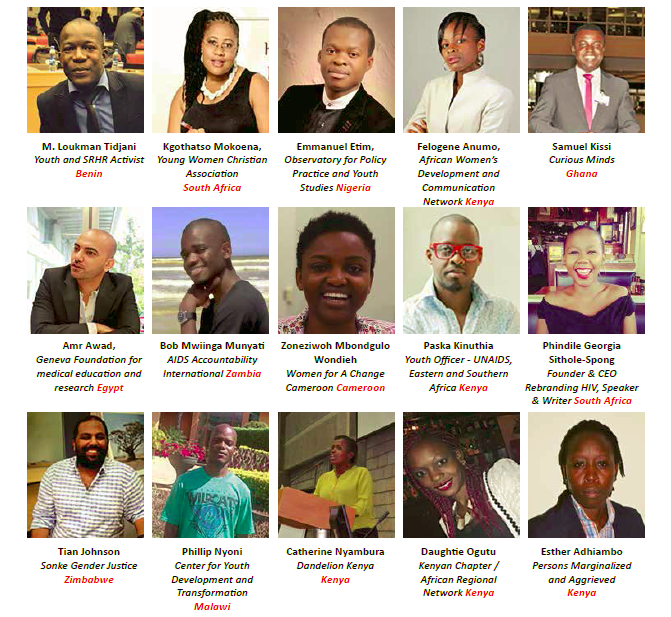