Paying the price: Who is really affecting the Global Fund decision making processes? 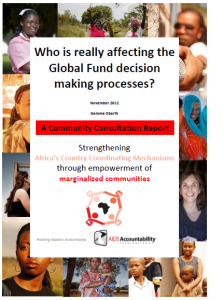 Johannesburg – Researchers today revealed that the Global Fund processes in place in South Africa and neighbouring countries discriminate against gay and lesbian people as well as youth.

The Global Fund to Fight AIDS, Tuberculosis and Malaria is an international financing institution dedicated to attracting and disbursing resources to prevent and treat HIV and AIDS, TB and malaria and is one of the world’s largest funders of HIV/TB and malaria, totalling 864 grants, worth US$21.9 billion.1 The distribution of this money, approximately half (over US$10 billion) has been granted to African governments, is decided by committees at national level called Country Coordinating Mechanisms (CCMs), and it is these committees that researchers at AIDS Accountability International think are neglecting the needs of youths and lesbian, gay, bisexual and transgender people.

These decision-making committees are supposed to be made up of representatives of government ministries, non-governmental organizations, affected communities (including women, girls and LGBT), the private sector, technical specialists and academic institutions. They are at the centre of the Global Fund’s commitment to country ownership and are supposed to demonstrate inclusive and participatory decision-making as they select which projects and organisations get the massive amounts of funding available from the Global Fund.

However, researchers at AIDS Accountability International say that there are huge gaps that exist in the processes of the Global Fund and that these most adversely affect the most marginalised people’s ability to access funding. Gemma Oberth, Senior Researcher at the Cape Town based think tank and activist organisation says: “CCM decisions about what to include in their Global Fund proposals often reflect political imperatives rather than objective, community-informed assessments of what is really needed. This has meant that the needs of marginalised  populations such as the (Lesbian, Gay, Bisexual and Transgender (LGBT) and the Youth continue to be excluded and neglected due to lack of representation and documented evidence  of existing needs. AIDS Accountability International conducted country case studies in SADC on ‘Who is really affecting the Global Fund decision making processes’ and the outcomes of the study have highlighted several factors contributing to the neglect of these groups in the processes of the Global Fund.”

The research findings, which will be launched at the Second HIV Capacity Building Partners’ Summit on 20 March, emphasize that an overly-generalized approach to HIV prevention and treatment, can often mute the needs of specific sub-groups, which need to be considered and addressed separately to the general population. This reality points to the need for representation of LGBT people on CCMs as a means to improve this situation. If these sub-groups and their specific needs are not considered in these decision-making CCM meetings then the Global fund processes will probably neglect to fully attain its obligations and be truly accountable in its health responses.

“While most felt that their needs were sufficiently advocated for on behalf of youth NGOs or other civil society groups, many did say that having young girls physically sitting on the CCM might be beneficial,” Ms Oberth said, “That said, there seemed to be a lack of awareness that having young people sit on CCMs is actually mandated by the Global Fund, as the guidelines for CCM composition state that ‘The Global Fund encourages CCMs to preferably include young people themselves through representatives of organizations established and led by young people.’ ”

In terms of accountability, the survey data as well as the qualitative interview data point out the fact that that CCM members are aware of the gaps that currently exist on Southern African CCMs with regard to representation and participation of women, girls and LGBT. “The fact that non-members are rating the performance, representation and thus accountability to these marginalized groups better than the people on the committee speaks to a need for civil society to be better informed what is really happening on the inside” said Phillipa Tucker, Executive Director of AAI and author of the quantitative survey report. “Often civil society will approve or rate performance of such mechanisms as better than they are even though insiders recognize there is a need for massive change. They need to begin to advocate for full inclusion of women, girls and gay people. If civil society is able to better engage with the lack of accountability, and with the obvious willingness of many CCM members to enact this change, it would not be difficult to quickly and effectively improve this shortcoming.”

The news is not all bad and the research also finds that the Global Fund’s inclusive and participatory structures do have the potential to expand opportunities for broad participation in decision-making. The successes registered by the Global fund are indicative of the potential opportunities it presents and in many countries response to HIV and AIDS have been brought to an exceptional scale by the funder.  Many successes have also been registered by the Global Fund with regards to advancing the rights of women and girls internationally but the researchers at AAI call for the Global Fund to keep pushing and rectify the gaps identified in their research.

LGBT: As a result of the legal, cultural and political challenges surrounding participation and advocacy for LGBT populations on CCMs in Southern Africa, a number of respondents in different countries agree that a public health approach is the best way to begin breaking down these barriers. AAI recommends that data collection for most-at-risk populations can help to disaggregate the needs of sub-populations, creating a more nuanced response and assisting public health officials to use a public health lens in doing their work. It is AAI’s recommendation that a public health approach be taken first, in order to work toward the end goal of an effective human rights discourse.

Accountability: The research indicates that much needs to be done on Southern African CCMs and if civil society is able to understand the commitments made, the expectations of all stakeholders, and able to hold them accountable by engaging with the issues. This requires stakeholders to build capacity in civil society, as well as with CCM members (who have demonstrated a willingness to improve the situation) so that they can begin to advocate for these highly necessary changes to better represent the needs of marginalized people.

On the 20 March 2013, Birchwood Hotel in Johannesburg, South Africa, AIDS Accountability International will be launching the full report at the Second HIV Capacity Building Partners’ Summit.

AIDS Accountability International (AAI) was established in 2005 with the mission to follow up on commitments to the AIDS epidemic made by governments, businesses and civil society. Still today, there is a widespread lack of advocacy tools for key actors to hold leaders accountable for the rollout of policy, program implementation and performance impact. AAI believes that leaders should be informed. This is achieved through our research and advocacy, which holds ineffective leadership accountable whilst applauding those who live up to their promises.